Florida From the House...To Your Home Newsletter, March 1972

Florida From the House...To Your Home Newsletter, March 1972

Florida From the House To Your Home Newsletter

The Florida From the House...To Your Home newsletter mailed to citizens of the 5th Congressional District of Florida, represented by U.S. Representative Louis Frey, Jr. (1934-2019), who served in the U.S. House of Representatives from 1969 to 1979. Rep. Frey was on several committees during his time in office, including the Select Committee on Narcotics Abuse and Control and the Science and Technology Committee. He was also the chairman of the Young Republicans of Florida.

The newsletter also discusses President Richard Nixon's (1913-1994) Temporary Wage and Price Controls of 1971, the U.S. economy in general, as well as the federal budget and campaign reform. The newsletter also states Rep. Frey's concerns over the condition of Lake Apopka, and his efforts with Reps. Don Fuqua (b. 1933) and William V. Chappell, Jr. (1922-1989) to form the Ocklawaha Basin Improvement Council, an organization that would tackle the lake's pollution problems on a regional level. Additionally, the newsletter describes efforts to improvement employment in the aerospace industry in Florida, as well as describing the issues facing attempts to fight drug trafficking in Mexico during the War on Drugs.

Copyright to this resource is held by the Lou Frey Institute of Politics &amp
Government and is provided here by RICHES of Central Florida for educational purposes only. 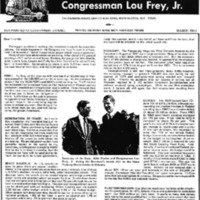