A letter from Harold L. Moody, fisheries biologist for the Florida Game and Fresh Water Fish Commission, to Lawrence E. Jerome. The letter gives a detailed analysis of the history of pollution in Lake Apopka, the development of the Zellwood Drainage District muck farms, and the management of Lake Apopka's water level.

Restoration work on the lake began in the 1960s with attempts by various agencies to remove “trash fish,” such as gizzard shad, from the lake via seining, which would hopefully allow the lake’s sport fish to thrive. The Lake Apopka Restoration Council, an initiative formed under Governor Claude Kirk (1926-2011) in 1967, launched several studies to find methods to improve the lake, though no serious action was taken. Various methods were debated to restore the lake through the 1970s and 1980s, including “drawdown,” which entailed completely draining the lake to allow the mucky bottom to consolidate. Restoration attempts were stalled for lack of funding and research. 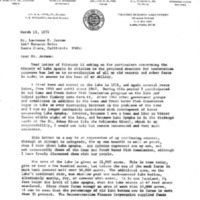