A newspaper article written by O. E. Frye, Jr., who was the director of the Florida Game and Fresh Water Fish Commission. In the article, Frye discusses the deterioration of Lake Apopka and attributes this to eutrophication, occurring from nutrients entering the lake from various sources such as agricultural run-off and sewage waste. The article also discusses a die-off of alligators, fish, and turtles in 1971. Specimens were sent to University of Georgia School of Veterinary Medicine, and the cause of death was found to be aeromonas liquefaciens, a pathogenic bacteria.

Restoration work on the lake began in the 1960s with attempts by various agencies to remove “trash fish,” such as gizzard shad, from the lake via seining, which would hopefully allow the lake’s sport fish to thrive. The Lake Apopka Restoration Council, an initiative formed under Governor Claude Kirk (1926-2011) in 1967, launched several studies to find methods to improve the lake, though no serious action was taken. Various methods were debated to restore the lake through the 1970s and 1980s, including “drawdown,” which entailed completely draining the lake to allow the mucky bottom to consolidate. Restoration attempts were stalled for lack of funding and research.

Copyright to this resource is held by The Palatka Daily News and is provided here by RICHES of Central Florida for educational purposes only. 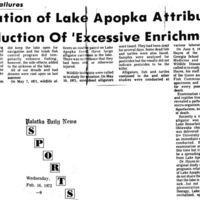