We Are Building a New Image in Concordville

We Are Building a New Image in Concordville

A New Image in Concordville

An artist’s concept of new headquarters for Westinghouse Electric's Combustion Turbine Systems Division (CTSD) in Concordville, Pennsylvania. CTSD was one of the divisions relocated to Orlando, Florida, in 1987. 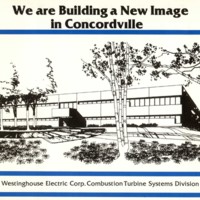 “We Are Building a New Image in Concordville.” RICHES of Central Florida accessed November 29, 2020, https://richesmi.cah.ucf.edu/omeka/items/show/7750.