The headquarters for Westinghouse Electric's Combustion Turbine Systems Division (CTSD) in Concordville, Pennsylvania. The world-class development laboratory at left background featured rigs for component testing at engine operating conditions, including large indirectly fired air preheater. CTSD was one of the divisions relocated to Orlando, Florida, in 1987. 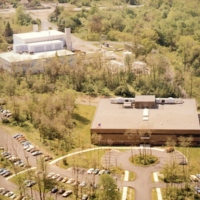