The first Westinghouse 501F (W501F) engine being readied for shipment from Pensacola, Florida, to Ulsan, South Korea, in October of 1995. The W501F featured a new Dry Low mono-nitrogen oxides combustion system. Prior to this milestone, the W501F was manufactured for Westinghouse by Mitsubishi Heavy Industries. 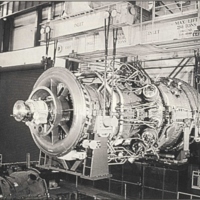