The first Westinghouse 501G (W501G) gas turbine being shipped from Hamilton Works in Hamilton, Canada, around October of 1998. This photograph was taken just after Siemens acquired the Westinghouse Electric Corporation's Power Generation Business Unit (PGBU) and the temporary adoption of the name Siemens-Westinghouse. The prototype Westinghouse 501G gas turbine was installed McIntosh Station in Lakeland, Florida and was first synchronized to the grid in April of 1999. 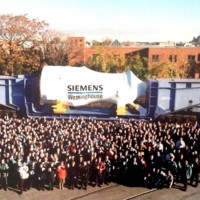