A dual-fuel nozzle for conversion of a 15MW Westinghouse 191 (W191) gas turbine to burn low-BTU coal-derived synthetic gas for a proof-of-concept demonstration of a gasifier at Dow Chemical Company's facility in Plaquemine, Louisiana. Dow claimed this conversion was the first of its kind in 1981. 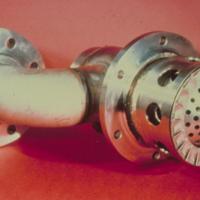