President Jimmy Carter (b. 1924) giving one of his fireside chats on energy. The message was usually focused on energy conservation. President Carter was elected to office several years after the 1973 Oil Embargo, which devastated the gas turbine market in the United State. Following the end of the embargo in 1974, U.S. government sought to conserve energy and reduce dependence on imported oil. During one of his fireside chats, President Carter introduced to the public the concept of cogeneration, which is a method of producing electricity and heat energy for industrial processes at the same time, usually with the use of gas turbines for power generation and the production of heat for industrial processes. Overall, cogeneration is considered to be a very efficient method of meeting both needs. President Carter was instrumental in the introduction and passage of the energy legislation of the late 1970s that greatly influenced the market for gas turbines, which reinvigorated the market for companies such as Westinghouse Electric.

Originally published by the Miller Center.

Copyright to this resource is held by the Miller Center and is provided here by RICHES of Central Florida for educational purposes only. 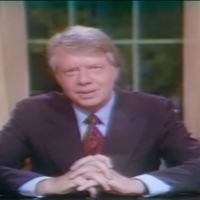