A document describing the formation of the Water Resources Restoration and Preservation program (WRR&P) within the Florida Department of Environmental Regulation (DER), as mandated by legislation passed by the Florida Legislature on July 1, 1977. The document also lists 12 restoration projects, both completed and underway, by the program, and gives updates on the Lake Apopka Restoration Project, including the proposed drawdown of Lake Apopka. Additionally, the document states that work on an Environmental Impact Statement (EIS), as required by the Environmental Protection Agency (EPA), was started in March of 1978 and was scheduled to be completed by early 1979. Finally, the document describes public involvement efforts by the program, including a public meeting held in Eustis on March 7, 1978.

Originally published by the Florida Department of Environmental Regulation.

This resource is not subject to copyright in the United States and there are no copyright restrictions on reproduction, derivative works, distribution, performance, or display of the work. Anyone may, without restriction under U.S. of state copyright laws: This resource is provided here by RICHES of Central Florida for educational purposes only. For more information on copyright, please refer to Secton 24 of the Florida Constitution. 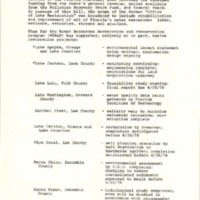