A letter from U.S. Representative Andy Ireland (b. 1930) to Harold L. Moody, fisheries biologist with the Florida Game and Freshwater Fish Commission (GFC), dated June 17, 1981. In the letter, Rep. Ireland discusses his co-sponsorship of House Resolution 38, which would create an Ad Hoc Committee for Water Resources. Rep. Ireland states that water management programs suffer from mismanagement and lack of coordination at the state and federal levels. He also states that as of the time of writing, there were 12 panels and 29 subcommittees in the U.S. House of Representatives and 10 committees and 21 subcommittees in the U.S. Senate that each deal with water management. Rep. Ireland's proposed Ad Hoc Committee on Water Resources would work towards a coordinated policy at the national level.

Although the letter does not state so explicitly, it was likely written in reference to Lake Apopka, which is one of Florida’s largest lakes and was once considered to be one of the world’s best lakes for bass fishing. The lake’s sport fish population began to decline in the 1960s, with major die-offs occurring almost yearly. The lake’s problems are generally considered to be the result of over-nutrification from various sources. Twenty thousand acres of wetlands bordering the lake’s north shore were drained in the 1940s and used for highly fertile “muck farms.” These farms were routinely flooded to protect the fragile soil, and the fertilizer and pesticide-laden water was then discharged back into the lake prior to each growing season. Other sources of pollution include discharge from citrus processing operations, as well as treated wastewater from sewage plants. The nutrient-rich discharge promoted algae growth in the lake, turning the water to a green color, and blocked sunlight from reaching aquatic vegetation, which provided food and habit to the lake’s fish population. The lake’s bottom soil became increasingly “mucky,” also disrupting aquatic vegetation from taking root.

1-page letter on Congress of the United States letterhead

This resource is not subject to copyright in the United States and there are no copyright restrictions on reproduction, derivative works, distribution, performance, or display of the work. Anyone may, without restriction under U.S. of state copyright laws:This resource is provided here by RICHES of Central Florida for educational purposes only. For more information on copyright, please refer to Secton 24 of the Florida Constitution. 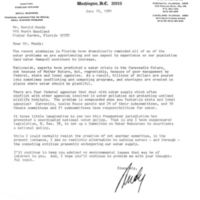