A newspaper article published in The Leesburg Daily Commercial discussing fish kills that occurred in Lake Apopka in June of 1981. The article gives quotes from Harold L. Moody and Mike Wicker of the Florida Game and Fresh Water Fish Commission (GFC), who state that further fish kills are very likely to occur. The article states that the current drought conditions in Florida were exacerbating the poor condition of the lake, concentrating the lake's water and promoting the growth of algae. The algae growth causes the lake's oxygen levels to drop, triggering fish die-offs. The Lake Apopka fish kill is estimated to have killed between 30 million and 40 million fish.

Originally created by Paula Horvath and published by The Leesburg Daily Commercial.

Copyright to this resource is held by The Leesburg Daily Commercial and is provided here by RICHES of Central Florida for educational purposes only. 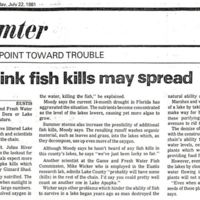