A newspaper article published in The Winter Garden Times discussing a fish kill in Lake Apopka in July of 1981. This fish kill, totaling an estimated four million fish, occurred two weeks after another larger kill in Lake Apopka on June 20, 1981. The article states that the kills are due to a combination of factors affecting the lake, including low water levels, high temperatures, and stormy weather, which led to the lake's high algae content deoxygenating the lake.

Copyright to this resource is held by The West Orange Times &amp
Observer and is provided here by RICHES of Central Florida for educational purposes only. 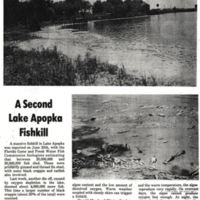