This photograph was incorporated into the Orange County Bicentennial Committee's More than a Memory collection, which explicitly traces the photo's origins to the Sanford Grammar School, located at 301 West Seventh Street in Sanford, Florida. Three circles of young girls are seen in the photograph holding hands with one another. The bottom portion of the original glass plate negative has suffered from significant flaking emulsion, which have been carried over to all subsequent prints.

Originally established as Sanford High School, the building constructed at 301 West Seventh Street in Sanford, Florida, in 1902. The building was designed by W.G. Talley in the Romanesque revival style. Due to an increasing student population, a new school building was constructed on the corner of East Ninth Street and South Palmetto Avenue in 1911. The original building on Seventh Street served as Westside Grammar Elementary School, which was later renamed Sanford Grammar School. In 1984, the building was placed on the National Registry of Historic Places and converted into the Student Museum. The building reopened as the University of Central Florida's Public History Center in 2012. 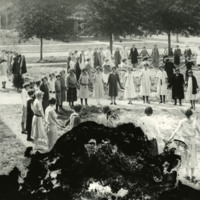