The Howard-Packard Land Company offices, based out of the Peoples Bank Building located on 101 West First Street in Sanford, Florida.The building was constructed in 1883 as the Lyman Bank and is the oldest brick building in Sanford's downtown district. In 1908, the building was refaced with a marble front. Howard-Packard Land Co. established their offices in the Peoples Bank Building in 1904. According to a 1909 advertisement printed in the United States Investor, the Howard-Packard Land Company offered twenty year mortgages at 8% interest. The value of the land holdings ranged between $500 and $100,000. The advertisement also states that, "the funds secured from the sale of these bonds will be used solely for the improvement and installation of the sub-irrigation system on lands which are held as security for this bond issue."

Originally created by and published by The Sanford Herald. 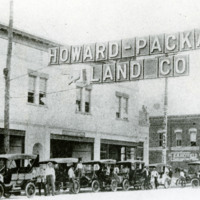