The Thirteenth United States Census records for Hamilton County, Civil District No. 2, Tennessee for 1910. The census divides the population by sex, race, age, marital status, number of children, occupation, literacy, whether they owned or rented, farm or house, if they were a Civil War veteran, whether they were blind, deaf or dumb, the place of birth and mother tongue of foreign-born persons and their parents. If foreign born, the person was required to provide the year they immigrated, whether they were naturalized and if they were able to speak English.

A notable resident listed in this record is Eugene Fricks. Fricks was born on March 26, 1893 to American parents. His father, William Barto Fricks, was from Georgia and his mother, Mattie Jacquess, was from Kentucky. From the 1920s to the 1930s, Eugene was married to his first wife, Ethel, with whom he had three children named Harley, Imogene, and Mattie. Fricks married his second wife, Grace, and had two children named Janette and Joseph. After his service in World War I, he had a career in aviation. Fricks retired from Pan-American Airways in 1961. He lived his remaining years in North Fort Myers and died on May 23, 1976. Fricks is buried in the Florida National Cemetery.

Originally created by John B. Willhart and published by the United States Census Bureau. 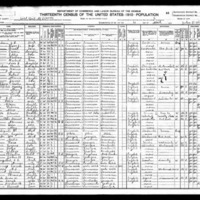