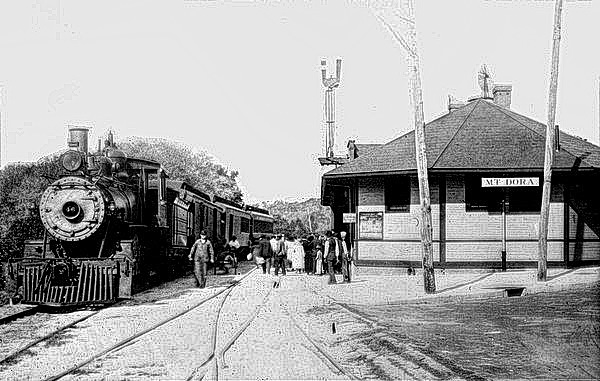 Passengers depart the station in 1920.

Constructed by the Atlantic Coast Line (ACL) Railroad Company in 1914 at a cost of $8,223, the Old Mount Dora Atlantic Coast Line Railroad Station, also known as the Old Mount Dora Depot, opened in 1915.[1] The 35 x 93 foot combination freight and passenger depot is located at 341 North Alexander Street. The 29.5 mile branch ran from Sanford, Sylvan Lake, Paola, Cassia, and Sorrento into Mount Dora and then to Tavares.[2] 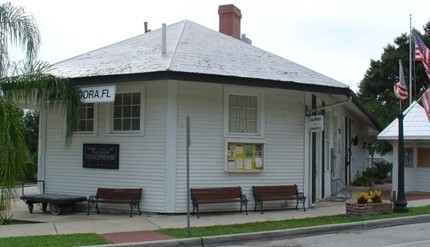 The train depot is now the home of the Mount Dora Chamber of Commerce. 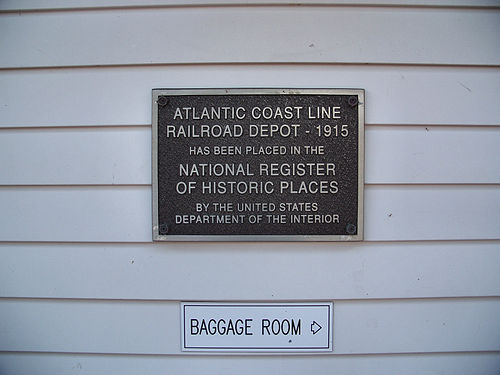 On March 5, 1992, the station was added to the U.S. National Register of Historic Places. 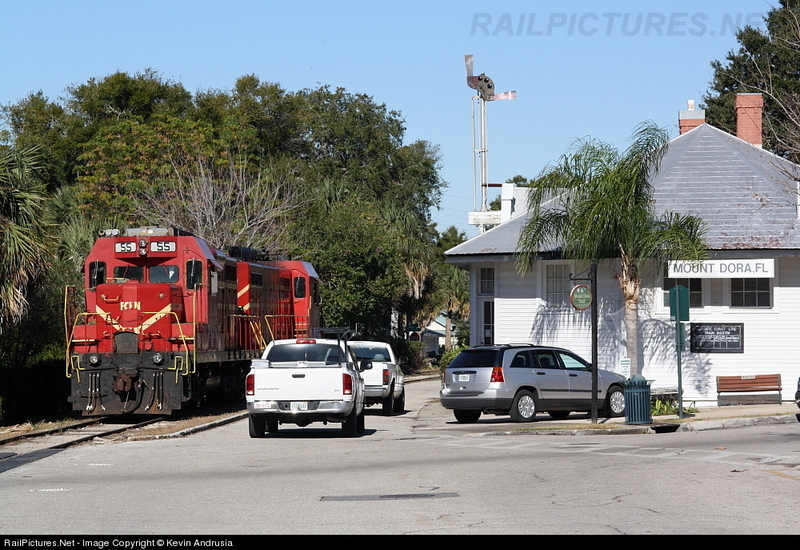 Light engines returning from the end of the line in Sorrento, where the first cut of an OUC coal train has been placed in storage. The coal train was moved to Tavares a few months later.

Mount Dora was settled in 1875 by David M. Simpson and his family. The Jacksonville, Tampa and Key West (JT&KW) Railway arrived in 1887, bringing in freight as well as tourists, who enjoyed a winter retreat for hunting, fishing, and boating.[3] There were two passenger trains running daily in each direction. By 1922, that number had increased to four "mixed" trains carrying passengers, mail, and freight.[4] In the early 1890s, trains leaving Mount Dora typically carried fertilizer, products from a commercial cannery, and citrus from local groves. Each piece of citrus was wrapped in tissue paper with a bass figure printed on it and a note offering to send a free brochure about Mount Dora available by request.[5]

Passenger train service continued until the summer of 1950, bringing in tourists and visitors. Renamed the Lake House in 1893, and Lakeside Inn in 1903, the two-story, 10-room hotel, called Alexander House, opened in 1883, becoming a favorite destination for famous visitors, such as President Calvin Coolidge, Thomas Edison, Henry Ford, and President Dwight D. Eisenhower.[6] Freight continued to leave the station until 1973, when the station was closed. Since then, the Mount Dora Depot has housed the Chamber of Commerce, which leases the space from the Seaboard Coast Line (SCL) Railroad for $1 per year.[7]

The station was placed on the U.S. National Register of Historic Places in 1992.[8] The City of Mount Dora, the Chamber of Commerce, individual donations, Winter Park Federal Savings and Loan, and community efforts contributed to the renovation of the building in 2013, just in time for the 100th anniversary of the depot.[9]