Postcard showing Orange Avenue in Orlando, Florida. The Rutland Building, located at 63 North Orange Avenue, can be seen in the foreground. The original two-story structure was designed by F. Earl Deloe in the Art Moderne-style for Joseph Rutland's menswear store in 1941. In 1952, three additional stories were added. Rutland's closed its downtown store in the late 1960s, but remained open in the Colonial Plaza Shopping Center.

Behind Rutland's is the Angebilt Hotel, located at 37 N. Orange. The building was constructed between 1921-1923. Plans to build the hotel were announced in June 1921 and construction cost $1 million. The Angebilt Hotel opened on March 14, 1923. The original owner was Joseph Fenner Ange, who moved to Orlando in 1913 from Martin County, North Carolina. Two months after the building's opening, Ange sold his interest in the hotel. In November 1924, a group of Orlando businessmen purchased the hotel for $1.25 million. Florida's first registered architect, Murray S. King, designed the building in the twentieth century commercial style, complete with eleven stories and 240 hotel rooms. Since its opening, the building has housed the Angebilt Hotel, the Bank of Orange and Trust Company, and the offices for two radio stations including WDBO ("Way Down By Orlando"), which was the first regular radio station in Orlando. As of 2010, it also is occupied by business offices and two restaurants.

Across the street is the San Juan de Ulloa Hotel, located at 32 North Orange Avenue in Orlando, Florida. The hotel was constructed from 1885 to 1886 by Captain C. E. Pierce at an initial cost of $150,000. The original owner was Henry S. Kedney, who moved from Minnesota to Maitland in 1870 and then to Orlando in 1885. The initial building was a three-story, wood-framed building topped with a dome. In 1887, Harry L. Beeman moved to Orlando and bought the San Juan Hotel. He added two stories and a new addition for $500,000 around 1900. In 1903, Beeman added a veranda on the north side. In 1914, Henry Green took charge of $20,000 in alterations, including the addition of a laundry room, twelve private baths, and the conversion of the barbershop into a café. In the spring of 1922, Turner Construction Company added an additional eight stories at a cost of $357,000. In May 1928, there was a plan to spend $150,000 to rebuild it along modern lines but it is not known if this was carried out or to what extent. From 1890 to 1900, it housed Orlando's Post Office. The hotel also housed a series of services for hotel guests and Orlando residents alike. Among these were several restaurants, a barbershop, and a laundry. The San Juan was the main focal point for activity in Orlando in the early years. The San Juan hit hard times in the 1960s and was re-opened as the Grand Central Hotel, which opened on October 6, 1978. The Grand Central served a gay clientele, featuring several themed bars and lounges. In 1979, the hotel was destroyed by fire. The building was eventually demolished in 1981. The current use of site is a business office originally known as the First Union Bank Tower. It is a sixteen-story, 300,000-square foot building, completed in 1983. 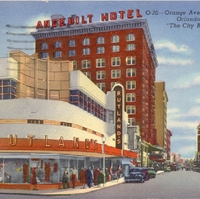