Veterans Compensation Application for the Commonwealth of Pennsylvania

Veterans Compensation Application for the Commonwealth of Pennsylvania

The Commonwealth of Pennsylvania’s Application Form for Veterans Compensation, which authorized the state to compensate veterans native to Pennsylvania at the time of their enlistment. The application includes name, current address, branch and location of service, place of birth, dependents (wife, children, parents), stations assignments, promotions, wounds, service overseas, and honorable discharge date.

A notable resident listed in this record is John Borris, who received payments of $10 per month for 20 months as compensation for his service. Born on February 3, 1891 in Johnson City, Pennsylvania, Borris served as part of Company C 1st Ammunition Train of the First Division during the First World War in 1917 and 1918. After his initial discharge in 1919, he returned to the United States Army in 1921 as part of the 7th Coast Artillery before his second and final discharge in 1924. After his service, he married Irene Nehf, with whom he had two sons, Roger and David. The family lived in Chicago, Illinois, and Phoenix, Arizona. Borris and his wife moved to Lakeland, Florida in 1988. Borris died on June 11, 1994 and is buried in the Florida National Cemetery in Bushnell, Florida. 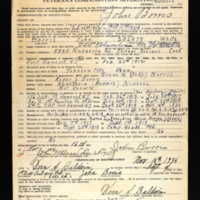