Brochure on the San Juan Hotel, one of the oldest hotels in Downtown Orlando, Florida. The brochure showcases that activities for tourists in Orlando Florida, as well as the luxury of the San Juan. The brochure was published around 1955.

The San Juan de Ulloa Hotel, located at 32 North Orange Avenue in Orlando, Florida. The building was constructed from 1885 to 1886 by Captain C. E. Pierce at an initial cost of $150,000. The original owner was Henry S. Kedney, who moved from Minnesota to Maitland in 1870 and then to Orlando in 1885. The initial building was a three-story, wood-framed building topped with a dome. In 1887, Harry L. Beeman moved to Orlando and bought the San Juan Hotel. He added two stories and a new addition for $500,000 around 1900. From 1890 to 1900, it alsohoused Orlando's Post Office. In 1903, Beeman added a veranda on the north side. In 1914, Henry Green took charge of $20,000 in alterations, including the addition of a laundry room, twelve private baths, and the conversion of the barbershop into a café. In the spring of 1922, Turner Construction Company added an additional eight stories at a cost of $357,000. In May 1928, there was a plan to spend $150,000 to rebuild it along modern lines but it is not known if this was carried out or to what extent.

The hotel also housed a series of services for hotel guests and Orlando residents alike. Among these were several restaurants, a barbershop, and a laundry. The San Juan was the main focal point for activity in Orlando in the early years, but the hotel hit hard times in the 1960s and was re-opened as the Grand Central Hotel, which opened on October 6, 1978. The Grand Central served a gay clientele, featuring several themed bars and lounges. In 1979, the hotel was destroyed by fire. The building was eventually demolished in 1981. The current use of site is a business office originally known as the First Union Bank Tower. It is a sixteen-story, 300,000-square foot building, completed in 1983.

Copyright to this resource is provided here by RICHES of Central Florida for educational purposes only.

For the spectator or the participant, the SAN JUAN is the center of an area offering a wide variety of activity, only part of which is pictured.

The San Juan-- a modern, completely appointed hotel of 250 rooms, each with bath, more than half of which are AIR-CONDITIONDE. Located in the center of beautiful Orlando in the midst of stores, restaurants and theatres and yet only a few minutes walk from lovely lakes and parks. Its spacious lobby and mezzanine lounge offers rest and quiet, a delightful place to relax. A trained staff, most of whom have been here for many years, will help make your visit a comfortable one. Modern in appointments, old in years, mellowed by tradition and steeped in courtesy, the SAN JUAN offers you a warm and sincere welcome. A friendly atmosphere and a spirit of helpfulness will make your visit of a day, a month or a season a pleasant and memorable one. 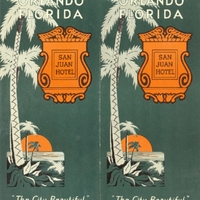