Booklet about the Bok Tower Gardens published in 1950. Edward Bok retired to the town of Lake Wales, Florida. Bok set out a plan to establish a natural garden and bird sanctuary where people to visit to quietly enjoy nature.He engaged Frederick Law Olmstead, Jr. to design the grounds and asked architect Milton B. Medary to design and build a carillon tower. Lee Lawrie, a noted sculptor from New York, designed the elaborate marble sculpture that adorns the tower. Work was completed in 1928 and, on February 1, 1929, President Calvin Coolidge dedicated the sanctuary. Edward Bok died less than a year later in 1930 and was buried at the foot of the tower.

The tower and the carillon housed inside is Bok Tower Gardens' most distinctive feature. The carillon consists of sixty bells, ranging in size from 16 pounds to just under 12 tons. The bells are played like an organ with the keys connected to the clappers of each bell. Bok Tower has had only three regular carillonneurs in its more than 70 years. The sanctuary's first carillonneur was Anton Brees, serving as the only carillonneur from 1928 until 1967. Milford Myhre has been the resident carillonneur since 1968. William De Turk has been the assistant carillonneur since 1993. De Turk is also the librarian of the Anton Brees Carillon Library, which is reportedly the largest and most comprehensive carillon library in the world.

Originally created by the American Foundation Incorporated and published by the Edward Stern and Company Incorporated.

Copyright to this resource is held by the American Foundation Incorporated and is provided here by RICHES of Central Floridafor educational purposes only.

Make you the world a bit better or more beautiful because you have lived in it.

The inspiration for the Sanctuary and the Tower came of that stuff of which dreams are made. The two combined a dream ti carry on the work of my grandfather, who a hundred years ago transformed a grim desert island in the North Sea, ten miles from the Netherlands mainland, into a bower of green verdure and trees to which came the birds which made the island famed.
But an inspiration is of little value if it is not carried into realization, and I was fortunate to enlist the deep interest and sympathetic cooperation of two men who are responsible for what the visitor sees: Frederick Law Olmsted for the Sanctuary and Milton B. Medary for the Tower. Naturally, I could not have obtained two men more thoroughly fitted to give me what I wanted to present to the American people for visitation, and what has been so often called "The Taj Mahal of America"--a spot which would reach out in its beauty through the plantings, through the flowers, through the birds, through the superbly beautiful architecture of the Tower, through the music of the bells, to the people and fill their souls with the quiet, the repose, the influence of the beautiful, as they could see and enjoy it in the Sanctuary and through the Tower.
An incidentally it gave me a wonderful opportunity to follow and carry out the injunction of my grandmother to her children and grandchildren: "Wherever your lives may be cast, make you the world a bit better or more beautiful because you have lived in it."
That is the basis upon which the Sanctuary and the Tower rests. 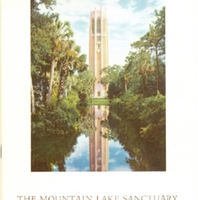