Postcard showing the United States Post Office and Federal Courthouse at 42-44 East Central Boulevard in Orlando, Florida. The building was constructed in a Spanish Colonial Revival style from 1939 to 1941 and dedicated on April 14, 1941. It has been occupied by the United States Post Office since 1941, the Federal District Courthouse from 1941 to circa 1974, and the office of the Roman Catholic Church since 2003. The building was renovated in the early 2000s and was modified for office and retail use, with the Post Office retaining 13,200 square feet. Plans included an adjacent parking garage on the north side, though that that aspect never came to fruition. St. James Roman Catholic Cathedral, located across Court Street from the Post Office, purchased the parts of the building not utilized by the Post Office and use it for Chancery office space.

Orlando "Florida's City Beautiful" is a progressive modern healthful resort amid semi-tropical beauty in the very heart of the Florida Peninsula, and truly presents one of America's loveliest cities.

Dear Erna:
I am getting a good rest but miss our bridge. Haven't started to do any thing don't suppose I will want [?] the [?].
Love,
Helen 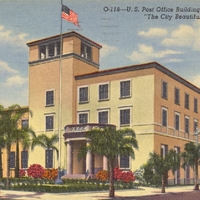