A program for the Orlando Gay Chorus' concert, "Happy Gays Are Here Again", on May 13 &
14, 2017, at the Plaza Theater in Orlando, Florida. The program includes short biographies on the Artistic Director James A. Rode, the Associate Artistic Director Harold Wright, the Co-Head Choreographers Talia Raymond and Dwight Shropshire, Choreographer Richard Lamberty, Principle Accompanist Sue Glerum, the Principle ASL interpreter Debbie Drobney, program notes, an outline of the show's itinerary, a list of chorus members and contributors, and a history of the Orlando Gay Chorus. 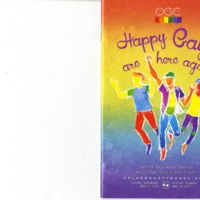 A Nightingale Sang in Berkley Square; All for the Best; Always Look at the Bright Side of Life; Begin the Beguine; Debbie Drobney; Dwight Shropshire; Ev'ry Time I Feel the Spirit; Everybody Rejoice; Finale B; GLBT; Happy; Happy Gays Are Here Again; Harold Wright; How Can I Keep from Singing; I Lived; I Sing Because I'm Happy; James A. Rode; Joy to the World; Jump; LGBT; LGBTQ+; Lift Up Your Voice; Menage; My Spirit Sang All Day; Nothin' But Treble; OGC; Orlando Gay Chorus; OUTLOUD!; Richard Lamberty; Some Nights; Spectrum; Sue Glerum; Talia Raymond; The Plaza Theater; Things That Never Die; Viva La Diva