A program for the Orlando Gay Chorus' concert, "Glad Tidings", on December 10 &
11, 2016, at the Plaza Theater in Orlando, Florida. The program includes short biographies on the Artistic Director James A. Rode, the Associate Artistic Director Harold Wright, the Co-Head Choreographers Talia Raymond and Dwight Shropshire, Choreographer Richard Lamberty, Principle Accompanist Sue Glerum, the Principle ASL interpreter Debbie Drobney, program notes, an outline of the show's itinerary, a list of chorus members and contributors, and a history of the Orlando Gay Chorus. 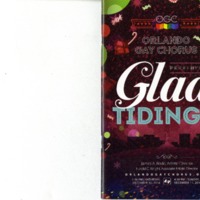 Adiemus; Christmas Dreams; Cold and Fugue Season; Debbie Drobney; Don't Be A Jerk (It's Christmas); Dwight Shropshire; Funky Dreidl (I Had a Little Dreidl); Glad Tidings; Glad Tidings of Joy; GLBT; Gloria A Dios; Harold Wright; Hotta Chocolatta; I Heard the Bells On Christmas Day (Peace on Earth); It's the Most Wonderful Time of the Year; James A. Rode; Jingle Bells; LGBT; LGBTQ+; Mary Did You Know?; Menage; Nothin' But Treble; OGC; Oh Christmas Tree; Orlando Gay Chorus; OUTLOUD!; Richard Lamberty; Spectrum; Sue Glerum; Talia Raymond; The Plaza Theater; The Twelve Days After Christmas; Tis A Wonderful Thing; What Child Is This; What Christmas Means To Me; While the Snow Lay Sleeping