Newspaper rticle on the resignation of Harry M. Papworth in 1936, the Seminole Chamber of Commerce representative on the Controlling Committee of the State Market. Papworth was a major figure in the success of the farmers' market. The Sanford State Farmers' Market, located at 1300 South French Avenue, was founded in 1934 in order to provide a central location in which farmers would sell their produce directly to consumers. The idea for the Sanford State Farmers' Market was devised by Fred Dorner and Gus Schmach, both members of the Seminole Agricultural Club. Sanford Chamber of Commerce president Harry M. Papworth also contributed to the development of the market. The Federal Emergency Relief Administration (FERA) authorized construction plans on June 11, 1934. On June 20, 1934, the City of Sanford donated a portion of the Alex V. French properties to the State Marketing Board, which selected the northwest corner of French Avenue and Thirteenth Street. The board approved the installation of telegraph and telephone equipment, as well as a three-pump filling station. The Sanford State Farmer's Market opened on December 18, 1934. By 1939, the Farmers' Market was bringing a total volume of business of $627,065.81. In 1941, business volume reached over $700,000. On April 4, 1957, a fire destroyed the building and caused damages estimated at $2.5 million. Reconstruction began almost immediately and the Farmers' Market was expected to re-open by the fall of 1957. In 1991, plans were created to restore, preserve, and convert the citrus packing house into a museum.

H. M. Papworth, Seminole chamber of Commerce representative on the Controlling Committee of the State Market, will submit his resignation at the Chamber board meeting tomorrow night, it was announced today.
The following statement was issued by Mr. Papworth:
"Since the organization of the Sanford State Market I have held the office of chairman on the Controlling Board representing the Chamber of Commerce. The market is now a well established institution and will always be fore the good benefit of Seminole and South Florida farmers providing politics are not permitted to control.
"When resigning as your president I was persuaded to retain office on the Market Controlling Board until the end of our fiscal year, July, 1936. This time has now arrived and not desiring to represent your honorable board further will you kindly appoint my successor at your convenience?"
The statement was signed by Mr. Papworth. 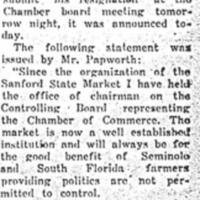