The Clark C. Griffith Memorial at Tinker Field, located at 287 South Tampa Avenue in Downtown Orlando, Florida, in 2003. Clark Calvin Griffith (1869-1955), also known as "The Old Fox," was a Major League Baseball pitcher, team manager, and team owner. He began his career in the MLB with the St. Louis Browns (present-day St. Louis Cardinals) in 1891. That same year, he played with the Boston Reds. From 1893 to 1900, he pitched for the Chicago Colts/Orphans (present-day the Chicago Cubs). Griffith both played and managed the Chicago White Stockings (present-day Chicago White Sox) from 1901 to 1902 and the New York Highlands (present-day New York Yankees) from 1903 to 1907. He retired as a player following the 1907 season, but reamined manager in 1908. He later managed the Cincinnati Reds from 1909 to 1911 and the Washington Senators (present-day Minnesota Twins) from 1912 to 1920. In 1920, he bought the Senators and continued as owner until his death in 1955. In 1946, he was elected to the National Baseball Hall of Fame.

Tinker Field is named after Joseph B. Tinker, who was a shortstop for the Chicago Cubs, manager of the Orlando Tigers, and the first Floridian to be selected for the Baseball Hall of Fame. The first baseball field at this location was built in 1914. The stadium was dedicated in 1923 and could seat approximately 1,500 people. In 1934, a fence was added. The field was home of the Orlando Rays, a minor league baseball team, until they moved to the Cracker Jack Stadium in 2000.

Tinker Field was also the Spring Training home for the Cincinnati Reds from 1923 to 1935, the Brooklyn Dodgers from 1934 to 1935, and the Washington Senators and the Minnesota Twins from 1936 to the 1990s. On May 14, 2004, Tinker Field was added to the National Register of Historic Places. The field has also served as the home to the Orlando Electric Daisy Carnival, an electric dance music festival, in 2011 and 2012. The stadium currently seats 5,100 people.

CLARK C. GRIFFITH
1869-1955
THIS MEMORIAL IS DEDICATED TO THE MEMORY OF THE LARE CLARK C. GRIFFITH WHO BROUGHT THR WASHINGTON SENATORS TO SPRING TRAINING IN ORLANDO, FLORIDA IN 1936. HE DEVOTED MORE THAN 65 YEARS OF HIS LIFE TO BASEBALL. A DISTINGUISHED MEMBER OF BASEBALL'S IMMORTAL HALL OF FAME, HE WON 237 GAMES AS A PITCHER; HE HELPED FOUND THE AMERICAN LEAGUE IN 1900; WAS PRESIDENT OF THE SENATORS' PENNANT WINNING TEAMS OF 1924, '35 AND '33. CLARK GRIFFITH GAVE THE NATIONAL PASTIME GREAT DIGNITY AND RESPECT...TURLY ONE OF ITS FINEST BENEFACTORS. THE IMAGE OF BASEBALL IS EXEMPLIFIED BY THE IMMORTAL "OLD FOX." 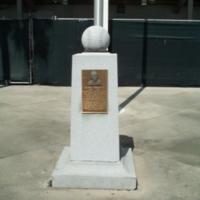 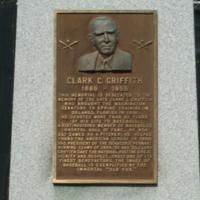 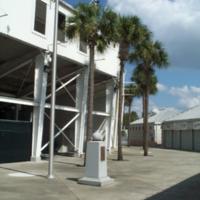