Eulogistical Services program for Mother Margaret Black Jones (1889-1976), the sister of Pilgrim Black (1905-2002) and the aunt of Patricia Ann Black (1956- ). The services were held on February 23, 1980, at the Hickory Avenue Church of God, located at 503 Hickory Avenue in Sanford, Florida. Reverend Percell Sanders presided over the service.

Originally created by the Hickory Avenue Church of God and owned by Pilgrim Black.
Inherited by Patricia Ann Black in 2002.

Viewing of The Remains --

MOVE TO THE CITY

When you move to the city
A house you rent or buy
You cannot go and get a house
Just on your face and eye.

You must put down some money
Don't care how your end meet
If you don't they'll pull you out
If you haven't shoes on your feet.

But when you move to Jesus
Don't need money to move
If you don't move before the Sheriff comes
Your soul you are sure to lose.

But shut your eyes and go
In the thckes of the fight
Just pack your sins and pu them away
And move to the city tonight. 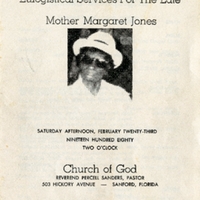