As an adult, she joined the Mt. Moriah Baptist Church under the pastorate of Reverend E. Bullard. Leatha married Reverend Robert Bradley and had one child with him, Reverend Israel Bradley Black (ca.1913-ca.2007). Several years later, Leatha married Reverend A. W. Walker and had four children with him: Joell Walker, Carrie Walker Oliver, Clementine Walker Barnes, and Harry Walker. Leatha was also a member of Rebecca Chapter 83 of the Order of the Eastern Star, a Freemason fraternal organization for both men and women.

On February 26, 1976, Leatha Walker passed away at the Seminole Memorial Hospital, located at the corner of East First Street and Mellonville Avenue in Sanford. Her funeral services included speeches and performances by the Gospel Choir of the Hickory Avenue Church of God, Reverend P. Sanders, Reverend W. Brown, the Mt. Moriah choir, Deacon R. Zanders, Mother R. Wilson, Fernandina Beach, Sister Flossie Zanders, Mrs. Clyde Walker, and Reverend J.S. Snelling. Her remains were cared for by the Sanders Funeral Home and she was buried in the Light Foot Cemetery.

Originally created by the Mt. Moriah Primity Baptist Church and owned by Pilgrim Black.
Inherited by Patricia Ann Black in 2002.

Copyright to the resource is held by Patricia AnnBlack and is provided here by RICHES of Central Florida for educational purposes only.

Church Affiliations: As a child she was a member of the St. Paul Missionary Baptist Church. Several years later, she joined the Mt. Moriah Primity Baptist Church under the pastorate of Rev. E. Bullard.

The family wishes to express thanks for all the acts of kindness extended to us during our hours of bereavement. May God bestow His richest blessings upon you. 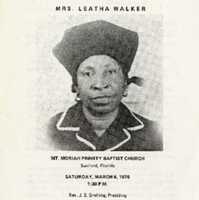