The lots located at 320-326 South Sanford Avenue in Georgetown, an historic African-American neighborhood in Sanford, Florida. The earliest known occupants of Suite 320 were two African-American residents: J. L. Johnson in 1911 and Samuel Benjamin in 1917. By 1924, Morris Narvis was running his clothing business from this location. Morris was also likely the owner of Morris Cleaner & Dyer, another clothes cleaning business located at 416 South Sanford Avenue in 1926. Joseph Berson Ladies' Wear was listed at this address in 1926.

The earliest known occupants of 322 S. Sanford Ave. were two African-American residents: Mack Battle in 1911 and Elvy McClaine in 1917. From approximately 1924 to 1926, Dimitios Cavoura ran his grocery from this location. W. S. Broderick, a local poultry dealer, was the earliest known resident of Suite 322 in 1911. In 1910, Broderick was beaten and robbed of $20 after leaving his business, which was also located on South Sanford Avenue. In 1917, Rivers Brothers was listed at this address. From approximately 1924 to 1926, W. T. Klicker Meats was located here. Klicker, the store's owner, resided at 133 South Sanford Avenue in 1917. Outlet - The Department Store, which originally encompassed Suites 322-326 in 1947, was expanded to include Suite 320 by 1952. In 1965, Sanford Feed Store was located at Suite 320 and Suite 322 was listed as vacant. By 1975, the Friendly Cafe, Fine & Dandy Wig Shop, and Tom & Joe's Variety Store were operating from Suite 320, Suite 322, and Suite 324, respectively. The cafe had previously been located at 309 South Sanford Avenue. At the time that this photograph was taken in January 2012, this lot was used as a parking lot for Diamond Glass Company, Inc. Diamond Glass Co. is a glass installation business based in Alpharetta, Georgia, with a Sanford location at 305 Palmetto Avenue.

The earliest known occupant of Suite 326 was the Beehive Inc. Department Store in 1924, as well as Dr. G. E. Sargeant, an African-American physician, who housed his office in the rear of the building. By 1926, Dave's Store, a department store, was located here. Outlet - The Department Store, which originally encompassed Suites 322-326 in 1947, was expanded to include Suite 320 by 1952. Suite 326 housed Mooney's Appliance Service in 1965 and C & C Liquor Store in 1975. C & C was originally owned by grocer and Italian immigrant Batista Ceresoli and his wife Carolina C. Ceresoli from approximately 1947 to 1965, when the liquor store was located at 312 South Sanford Avenue. Their son, Martin Q. Ceresoli, later owned the liquor store until his death on January 27, 1997. At the time that this photograph was taken in January 2012, this lot was vacant with no building. 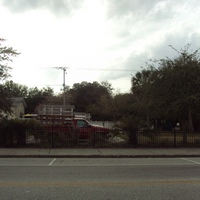 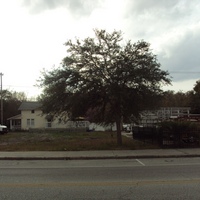 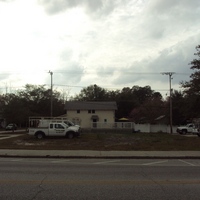 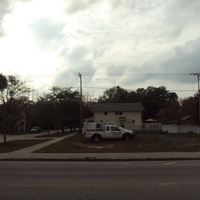