The lots located at 319-323 South Sanford Avenue in Georgetown, an historic African-American neighborhood in Sanford, Florida. The earliest known occupant of Suite 319 was African-American resident R. S. Johnson in 1911. In 1926, the African-American-owned business called the Sanford Garage was located here, but the garage had moved to 317 South Sanford Avenue by 1926. Model Beauty Shop, another black-owned business, was listed at this address in 1947. In 1952, the building at this address housed four businesses: Jerry's Arcade and Brown's Studio Photography, an African-American business, on the first floor; the office of Julius Ringling, a black dentist, and Dr. George E. Starke, a black physician. It is possible that George E. Starke was actually Dr. George H. Starke (ca. 1899-ca.1979), who opened his practice in Sanford in 1927.

K.S. Johnson, an African-American resident, was the first known occupant of Suite 323 in 1911. The Three-In-One Store was listed at this address in 1917 and J. A. Sands ran his plumbing business from this location in 1926. As stated above, FMB 5-10 & 25c Store operated from this lot from approximately 1947 to 1952, although the business moved to Suite 321 by 1965. At the time that these photographs were taken in January 2012, Suites 321-323 were vacant lots with no buildings. Sanford Supermarket, located at 329 South Sanford Avenue, can also be seen in this photograph. 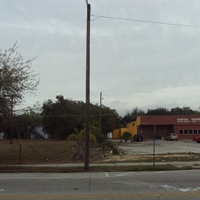 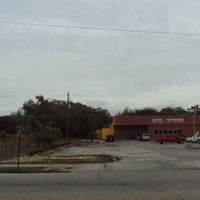