The Latest Merchandise News for Spring and Summer, 1939

The Latest Merchandise News for Spring and Summer, 1939

A Sears, Roebuck & Company merchandise catalog for 1939. A Sears store was located at 111-113 North Orange Avenue in Downtown Orlando, Florida. Sears moved into the first floor of Philips Apartments in 1931. Before Sears arrived, the building, as well as the city of Orlando, was experiencing economic decline. However, Sears proved so successful that the building had to expand and the property value of the entire building increased by 25 percent. In 1939, F. Monroe Alleman and Kenneth Kraft bought the Sears building for $300,000. Twenty years later, Alleman sold the building for $1.1 million, but Sears was kept open with 12 years left on its lease.

In 1962, land on East Colonial Drive was bought to open a freestanding Sears store and a year later construction started. In 1973, the Sears on Colonial was incorporated with the Fashion Square Mall and it remains open today. On May 4, 1974, due to the expanding city and regional malls, the downtown Sears store closed its doors. Ten years later, the building was renovated and became what it is today, a bronze-colored glass tower nicknamed the Copper Whopper.

Copyright to this resource is held by Sears, Roebuck & Company and is provided here by RICHES of Central Florida for educational purposes only.

THE LATEST
MERCHANDISE NEWS
FOR SPRING AND SUMMER
1939
SEARS, ROEBUCK AND CO. 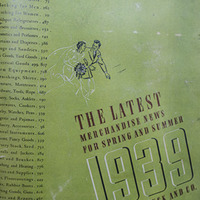