Walton MacJordan (b. 1905) was born in 1905 in Kentucky and attended college at the University of Alabama. He moved to Georgia and started his career in retail by becoming the youngest manager of a department store in the South. In 1932, he moved to Jacksonville, Florida, and started working for Sears, Roebuck & Company as a merchandise manager. A year later, he relocated to Orlando where he became the manager of the Sears store located at 111-113 North Orange Avenue. MacJordan left Orlando in 1937 for Chicago, Illinois, to work at the headquarters of Sears as a General Merchandise Manager of all stores. In 1942, during World War II, MacJordan served in the United States Air Force. During his service as a lieutenant, he used his experience he had in retail to manage the supplies and maintenance for several bases. He soon became a public relations officer for the southeastern portion of the country and was promoted to captain. In 1945, he returned to Orlando to manage Sears again. MacJordan also served his community as chairman of the American Red Cross in Orlando in 1950 and a member of the board of directors of the Central Florida Exposition.

RECENTLY DISCHARGED FROM THE AIR CORPS WHERE HE SERVED AS A CAPTAIN...
AMVETS

Remember only 5 prs[?] to a customer!

PRESIDENT OF THE ORLANDO MERCHANT ASSOCIATION.... 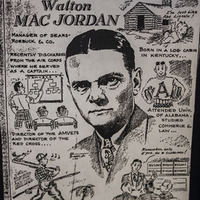