A facsimile from Myriam Garrett of the Student Museum to George Kosmac, dated October 16, 2007. Attached to the letter from Frederick P. Gaske, a Florida State Historic Preservation Officer, to Bill Vogel, Superintendent of Seminole County Public Schools, dated October 30, 2006. In the letter, Gaske addresses the danger of the demolition of Sanford Grammar School's historic lunchroom building, explains the importance of preserving the structure, and offers suggestions to Vogel in regards to saving the building via grants. 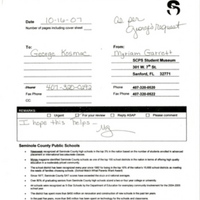