Newspaper article on the history of the Mayfair Inn. Originally named after the Sanford Mayor and president of Seminole County Bank, construction of the Forrest Lake Hotel began in 1916. Local architect Elton J. Moughton designed the hotel. In 1925, Hotel Forrest Lake opened and became a popular destination for tourists visiting Sanford. By 1929, the hotel closed after the stock market crash and the downfall of Florida's tourism and real estate boom. William E. Kirchhoff leased the building in 1934 and the hotel reopened in 1935 with the new name Mayfair Hotel. Under Kirchhoff's ownership, the Mayfair Hotel became known as one of the finest hotels in the South. Kirchhoff sold the hotel in 1948 to Horace Stoneham, owner of the New York Giants. Stoneham then sold the building to the Bernard McFadden Foundation who later sold it to the New Tribes Mission. The New Tribes Mission's goal is to reach tribes who have no access to the Gospel through translated publications and missionary work.

Originally created by Grace Marie Stinecipher and owned by The Seminole Herald.

Copyright to this resource is held by the The Seminole Herald and is provided here by RICHES of Central Florida for educational purposes only.

SANFORD - Memories of activities at the former Mayfair Inn came flooding back as more than 100 members and guests of the Sanford Historical Society attended a recent dinner meeting in the building that is now New Tribes Mission Headquarters.
The event was held in the ballroom, now a chapel, where so many May Day Balls, Junior Senior Proms. Inter-Fraternity Dances, and Mayfair Season Openings were attended by the long-time Sanford residents.
Newcomers to the area were entranced by the memorabilia displayed and the evident excellent restoration of the building.
Featured speaker was Bill Kirchhoff whose father, William E. Kirchhoff Sr. had owned the Mayfair Hotel from 1937 to 1947. Bill gave a history of the building, complete with personal anecdotes and the showing of treasured items.
According to Bill, Forrest Lake, who was mayor of San-ford and also president of the Seminole County Bank, thought that a lakefront hotel would put Sanford on the map and proceeded to build one.
The $300,000 building was financed in 1925 by a public/private partnership owned by both the city and several citizens. Furnishings came from John Wannamaker's of New York.
There was no hotel in Orlando to compare with the Forrest Lake Hotel, and for a short time it did a successful business. However; the Florida Boom collapsed in 1926, sharply curtailing tourism. The stock market crash of 1929 was the last straw which forced the hotel's closure.
The furniture was sold and the ballroom was used to store Buicks which no one could buy. William E. Kirchhoff was one of the fortunate ones who had made money during the Depression; he grew and shipped gladiolas. The closed hotel saddened him, so in 1934 he leased it with an option to purchase. The condition was that he must open at least 30 rooms each year for the next three years.
There was no furniture, so Kirchhoff bought pieces at auction from Atlantic City and other northern hotels which had gone broke. It was shipped back on the trucks which had taken gladiolas up north.
Silverware was retrieved from a barge, the Shamrock, Kirchhoff bought from the bankrupt Osceola Cypress Company. That cleared up the mystery as to why it was all monogrammed with an S.
The grand opening of the newly named Mayfair Hotel was Feb. 12, 1935, with music provided by Eddie Stevens and the Florida Rhythm Boys. Frank W. Swift was the manager.
In. 1937, Kirchhoff exercised his option and bought the Mayfair for $15,000. Thinking it would help entice northerners he changed the name to Club E. Rancho Grande and advertised it as a club with limited membership in a beau¬tiful brochure. Members would get special rates and other amenities. This was a fi¬asco, so the name was changed back to Mayfair and to a regular hotel which oper¬ated as such until' World War II.
With the opening of the Sanford Naval Air Station in 1942, the military took control of the Mayfair and housed officers there. The Kirchhoffs moved to Bradenton as they now had no place to live in Sanford. The hotel was re¬turned to them in 1944.
From the rough treatment by the Navy and also several
storms, many repairs had to be made to the hotel. Bill remembered flower buckets all over the ballroom during the many rains.
After paying $10,000 to have it reroofed, Kirchhoff began to try to sell the hotel as it was costing too much. He did build the swim¬ming pool and tennis courts about this time. And WTRR was began in one of the down¬stairs rooms in 1947.
Several deals to sell fell through, but- finally in 1947 it was sold, though Mr. Kirchhoff still held a second mortgage on it. When he realized that the new owner was selling fur¬niture to pay the first mortgage he notified his attorney who put padlocks on the doors; the owner was to keep the hotel in good rental condi-tion. Unbeknownst to Kirch¬hoff, it was during the state high school baseball champi¬onships being played here and teams that were staying in the hotel were locked out. This in¬cident put Kirchhoff in a bad light and he also had to take back the hotel.
Kirchhoff finally got rid of the hotel by selling it to Horace Stoneham, owner of the New York Giants whose farm teams were in spring' training in Sanford.
The Giants later sold to Ber-nard McFadden Foundation which operated Sanford Naval Academy there for many years, selling out to New Tribes Mission.
Bill stated that the hotel was a great place for a small boy to -live as each member of the family (he has two older sisters) own separate room and bath. He enjoyed sneaking into the various functions and mingling with the guests.
Following this account of the Mayfair, Robert Moseley, Partnership Development Consultant, told the group that the purpose of New Tribes Mission was to take the gospel to all new tribes. The missionaries learn the language and cuisine and then translate the Bible into their language. The printing press across the street prints these and other Christian literature. Fifty families lived in apartments on the second and third floors pf the former hotel and 100 Sanford families work in their various Sanford facilities. There are 3,000 missionaries in 27 countries.
During the brief business meeting of the Society, President Millard Hunt thanked Barbara Chapman and her committee for coordinating the event and Moseley and New Tribes Mission for their excellent cooperation.
It was announced that half-year memberships to the Society would be sold that evening only and 23 single and family memberships were sold.
The next scheduled Society meeting will be Sept. 24 at the Sanford Museum with Jim Robison, newspaper columnist, as speaker. 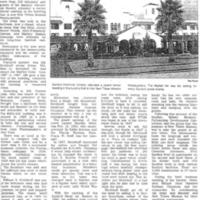