Excerpt from tour brochure of historical buildings in Sanford, Florida. This excerpt features the New Tribes Mission Headquarters, located at 1000 East First Street. Originally named after the Sanford Mayor and president of Seminole County Bank, construction of the Forrest Lake Hotel began in 1916. Local architect Elton J. Moughton designed the hotel. In 1925, Hotel Forrest Lake opened and became a popular destination for tourists visiting Sanford. By 1929, the hotel closed after the stock market crash and the downfall of Florida's tourism and real estate boom. William E. Kirchhoff leased the building in 1934 and the hotel reopened in 1935 with the new name Mayfair Hotel. Under Kirchhoff's ownership, the Mayfair Hotel became known as one of the finest hotels in the South. Kirchhoff sold the hotel in 1948 to Horace Stoneham, owner of the New York Giants. Stoneham then sold the building to the Bernard McFadden Foundation. After the Naval Air Station Sanford acquired $1.3 million to fund the construction of a naval academy in 1963, the Foundation made significant alterations to the building to house students from the Sanford Naval Academy. The Foundation later sold the building to the New Tribes Mission in 1977. The New Tribes Mission's goal is to reach tribes who have no access to the Gospel through translated publications and missionary work.

Copyright to this resource is held by the Sanford Historic Trust and is provided here by RICHES of Central Florida for educational purposes only.

Parking and access is from Seminole Blvd.
Entrance is through the front entrance on First St.

This 1925 Mediterranean-style building today serves as the missionary group's U.S. headquarters and employee residence. Sanford architect Elton Moughton designed the structure that flourished as the Forrest Lake Hotel until the Depression. In 1930 it was renamed the Mayfair and became the centerpiece of the city's social and cultural life. The New York Giants baseball team bought the property in 1947 and it became the destination of many notables such as Marilyn Monroe, Joe DiMaggio and Al Capone. The Sanford Naval Academy, a private boarding school, used the building until it closed in 1976. For the past 30 years, the structure has been occupied by the current owners, a nondenominational group that spreads the Gospel to isolated people.

A stand out from last year, the New Tribes Mission again hosts in their grand ballroom, the Trust's TableScapes, a festive abundance of 12-15 individual tables all decked out for that one special day of the year. Decorated by local designers, merchants and artists designed to unleash your imagination for setting your own Holiday Table.

Enjoy refreshments, music and be sure to vote for the "People's Choice Awards!" Rest Rooms are Available. 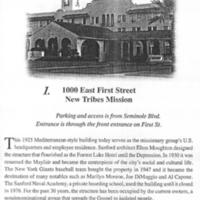