And Then There's Henry Walcott...Not So Pleased

And Then There's Henry Walcott...Not So Pleased

And Then There's Henry Walcott

A newspaper article about Henry Walcott, an Oviedo resident who has watched the small community grow into the bustling town it became after the arrival of Florida Technological University (present-day University of Central Florida) during the 1960s. This article is significant in that Walcott is able to describe Oviedo as it once was, giving insight into Oviedo's past. The article was published in The Seminole Star around 1970 and its photographs were taken by Janice Abrams.

Digital reproduction of original newspaper article: "And Then There's Henry Wolcott...Not So Pleased." The Seminole Star.

Originally published by The Seminole Star.

Copyright to this resource is held by The Seminole Star and is provided here by RICHES of Central Florida for educational purposes only.

And Then There's Henry Wolcott...Not So Pleased

Henry Wolcott remembers Oviedo when it was a small, agricultural town. He remembers when the doors to his 1884 house had no locks, when he could leave his car running to dart into the post office, when kids raced model-T cars through the Oviedo muck areas.

His three-story wooden house on Lake Charm now has a complete set of locks since much of the original furniture has been stolen. Henry wouldn't dare leave his keys in his car, much less leave the motor running. And all the muck areas have been fenced: "Kids have to spend money to have fun nowadays," Henry says.

THE GROWTH of Oviedo hasn't pleased Henry. "You can't do what you want to with so many people around," he says.

Born in 1915, Wolcott has many memories of his birthplace. He and his wife, Margaret, have raised three children in the house built in 1884 by A.B. Chase.

WOLCOTT'S grandmother in 1894 traded Chase a hotel in the Catskill Mountains in New York for the house and moved family and furniture into the house.

Floors in the house are made of thin strips of oak. The house is furnished with antiques and a sprinkling of modern appliances.

In the living room there's a beautiful antique whatnot, origin unknown.

"NOBODY KNOWS where that piece came from," says Wolcott. We've had two offers to buy it, one in the heart of the Depression when no one had any money. A man offered my grandmother $1,850 for it, but she wouldn't sell. Then, recently, a man from an antique store offered me $40. Needless to say, I didn't sell it."

The attic, or third floor, is splendid. It is complete with cobwebs as well as memory-provoking items. It is haphazardly furnished with old furniture including Wolcott's childhood highchair, his crib and his father's workbench where old rusty tools are welded to the bench top with cobwebs.

THERE ARE two trunks with treasures of old books; letters tucked in a cigar box. In the corner, there's an old waffle iron, and an ancient organ that Wolcott is transforming from a pedal to a power model in his spare time.

"Much of the stuff is gone," Henry says with a sigh. "I've given a lot of it away and have traded some, but so much has been stolen."

ALTHOUGH WOLCOTT finds the house comfortable, he does have a few complaints, his main one the shortage of time he has to work on the house. He is a bank inspector abd travels a great deal.

He also tosses in a complaint or two about the roof leaking and comments on his disappointment in calling in people to make repairs.

"PEOPLE DON'T do the kind of jobs they are expected to do," he says. "Take my fireplace, for example. I had a man redo it to eliminate safety hazards. He did, but managed to leave out a brick. When I built a fire, part of it blew through the hole and caught the adjacent room on fire. Fortunately, the damage wasn't extensive. "I'd like to retire now, but the increased cost of living means I have to keep working. I hope to retire in three years and spend more time working on the house and in the groves.

"I DON'T like any big town," he says. "I'd even enjoy a little more room. Fortunately, my neighbors haven't sold their land to developers. But it can't last long. Soon there will be paved streets and 200 houses packed together.

"I liked it when everybody knew everyone else. Everybody got along. The first sheriff in Oviedo didn't have to carry a gun. He just called people in. Now the police need a posse or a small army to bring in the lawbreakers."

"KIDS CAN'T have fun any more without spending money," he says. "When I was a boy, we'd go down to the St. Johns River and camp. Sometimes we'd race and slide our model-Ts in the muck farms.

"When we went to watch the Daytona stock car races, we'd take about $3 between us, which was enough money to buy food for a week, camp on the beach and watch the races."

HE SAYS the main thing he has against people coming in is the control that must be placed on personal freedoms.

"I remember when driver's licenses were $1; now you pay $6. You gotta have permits to do anything.

"A friend of mine wanted to tear down an old rotting building. He had to get permission by buying a $7.50 permit to tear down the house on his own property.

"You even have to have a permit to burn trash."

He sums up his reaction to the influx of people in Oviedo with the quote: "The more I see people, the more I love my dog."

So much has been stolen, says Henry Wolcott of the old furnishings in the house where he was born. The attic holds many reminders of the past, including his father's workshop bench, a variety of chairs.

High chair in the attic

Whatnot in living room 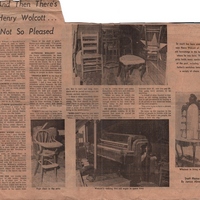