The homestead documentation for Benjamin James. James' homestead was located in the southwestern portion of present-day Oviedo. James was born Savannah, Georgia, and migrated to Hastings, Florida, where he met his wife, Esther James. The couple married on January 24, 1913, at what then was called The Woods, on the eastern side of the town of Gabriella, near Bear Gully Lake. The couple had nine children, in addition to the four children from Esther's previous marriage.

On July 8, 1921, James filed a homestead for 160 acres for his growing family at The Woods. Following a hurricane devastated Miami on September 11, 1926, the James family opened their property to Floridians left homeless in the aftermath. These refugees became the first settlers of the Jamestown and included Bob and Flossie Wells, George and Nettie Davis, and Morris J. "Preacher" and Margaret Williams, the Nails, the Olivers, the Perrys, the Bryants, the Evans, the Brannons, the Walkers, and the Ryans. James is the only African American to have a Central Florida town named after him.

Copyright to this resource is held Kathy Parry and is provided here by RICHES of Central Florida for educational purposes only. 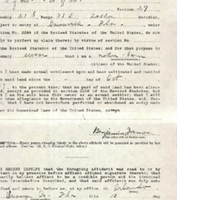