In commemoration of the 100-year anniversary of the Westinghouse Electric Corporation, this booklet was created to tell the highlights of the contribution of George Westinghouse (1846-1914) , identify the many connected families in the employee ranks, and to report on the celebration that marked the event and progress of the organization.

Copyright to this resource is held by Westinghouse Electric Corporation and is provided here by RICHES of Central Florida for educational purposes only. 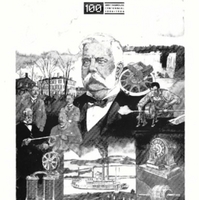