A postcard depicting a view of Tarpon Avenue, the main street in Tarpon Springs, Florida, looking east. The earliest Americans settlers to Tarpon came following the American Civil War. The town was first promoted by Hamilton Disston (1844-1896) as a town for relaxation and health. In early 1987, Tarpon Springs became the first city to be incorporated on the Pinellas Peninsula. The Orange Belt Railway first arrived in 1887 and sponge harvesting became a prime industry in the area. Tarpon Springs thrived during the Florida land boom of the 1920s and collapsed when the rest of the state bust in 1926, which also saw the devastation of a major hurricane. Despite the land bust and the Great Depression, the sponge industry continued to thrive until 1938, when a blight infested the sponge beds. Instead, the city turned to tourism, capitalizing on its rich Greek culture. 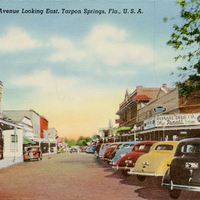