A memorandum from Marketing Manager K. A. Oleson and Commercial Operations Manager A. R. Collier to Electric Utility Sales and Electric Utility International regarding the reorganization of Westinghouse Electric Corporation's Steam Turbine Generator Division (STGD). In 1983, the Westinghouse power generation business operation, starting with the Steam Turbine Generator Division, was taking shape in its new Orlando headquarters under the management team led by General Manager Dr. Stan Quick (under E. J. "Gene" Cattabiani, Vice President of the Power Generation Group). This series of letters, memoranda, and charts documents the changes in management leadership at the Orlando site from 1983 through 1998, when the Westinghouse Power Genration Business was acquired by Siemens. Following the announcement of the retirement of Dr. Quick in 1984, the management was led by the team of Bob Ractcliffe and Howard Pierce. In 1987, Tom Campbell was appointed General Manager of the Power Generation Technology Systems Division under Nat Woodsen and Jim Moore, Vice Presidents of the Power Systems Business Unit. In 1988, the Power Generation Business Unit (PGBU) was formed under Frank R. Bakos, Vice President and General Manager (under Executive Vice President Ted Stern), and, in 1995, Randy H. Zwirn took the helm as Vice President and General Manager of the PGBU. He remained at the executive level for 20 years, through the PGBU acquisition by Siemens in 1998 and beyond to 2016.

Originally created by K. A. Oleson and A. R. Collier. 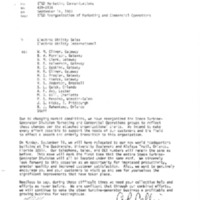 Oleson, K. A. and Collier, A. R.. “Memorandum from K. A. Oleson and A. R. Collier to Electric Utility Sales and Electric Utility International (September 14, 1983).” RICHES of Central Florida accessed December 9, 2022, https://richesmi.cah.ucf.edu/omeka/items/show/7428.