A report on the potential Environmental restoration of Lake Apopka for the Lake Apopka subcommittee of the Orlando Area Chamber of Commerce Environmental Resources Committee. Allen E. Arthur, member of the Orange County Board of County Commissioners, served as chairman of this subcommittee. This report summarizes the sources of pollution in Lake Apopka and gives a brief Environmental history of the area. The report identifies water quality goals for the lake, and recommends ending pollution discharge as the first step to restoring the lake. The report also discusses a possible lake drawdown as one way to help restore water quality, and notes Lake Carlton, a small lake downstream of Lake Apopka, as a possible test site for the drawdown method. The report also mentions proposals to acquire the Gourd Neck Springs area for use as a recreational park, using funds from the Environmental Endangered Lands (EEL) program, and claims that purchase of the area was turned down by the State Interagency Planning Committee on Environmental Endangered Lands.

Lake Apopka is one of Florida’s largest lakes and was once considered to be one of the world’s best lakes for bass fishing, supporting a large sport fishing and tourism industry. The lake’s sport fish population began to decline in the 1960s, with major die-offs occurring almost yearly. The lake’s problems are generally considered to be the result of over-nutrification from various sources. 20,000 acres of wetlands bordering the lake’s north shore were drained in the 1940s and used for highly fertile “muck farms”. These farms were routinely flooded to protect the fragile soil; this fertilizer and pesticide laden water was then discharged back into the lake prior to each growing season. Other sources of pollution include discharge from citrus processing operations as well as treated wastewater from sewage plants. The nutrient-rich discharge promoted algae growth in the lake, turning the water to a green color, and blocked sunlight from reaching aquatic vegetation which provided food and habit to the lake’s fish population. The lake’s bottom soil became increasingly “mucky”, also disrupting aquatic vegetation from taking root.

Restoration work on the lake began in the 1960s with attempts by various agencies to remove “trash fish” like gizzard shad from the lake via seining, which would hopefully allow the lake’s sportfish to thrive. The Lake Apopka Restoration Council, an initiative formed under Governor Claude Kirk in 1967, launched several studies to find methods to improve the lake, though no serious action was taken. Various methods were debated to restore the lake through the 1970s and 80s, including “drawdown”, which entailed completely draining the lake to allow the mucky bottom to consolidate. Restoration attempts were stalled for lack of funding and research.

The Lake Apopka Restoration Council was reformed in 1985 under Governor Bob Graham; in 1987 the Surface Water and Improvement Management Act was passed; together these allowed comprehensive restoration plans to take shape, such as the Marsh Flow-way, a project by the St John’s Water Management District which uses natural methods to remove nutrients from the lake. The Friends of Lake Apopka, a citizen Environmental advocacy group, began to push for further restoration efforts in the 90s. The lake’s north shore muck farms were eventually purchased by the State of Florida, helping to reduce the amount of nutrient entering the lake. 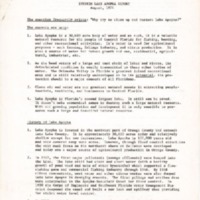