A history of how the Greater Orlando Chamber of Commerce petitioned the federal government to construct the new Downtown Orlando Post Office and federal court building in Downtown Orlando, Florida, in 1935. After a request was filed by U.S. Representative, J. Mark Wilcox (1890-1956) Orlando was placed of an eligibility list by Congress in 1936. By mid-1936, it was determined that Orlando was in need of the new federal buildings. Efforts to that end were supported by Rep. Joe Hendricks (1903-1974) and U.S. Senators Charles O. Andrews (1877-1946) and Claude Pepper (1900-1989). A House bill for the Downtown Orlando Post Office was supported and taken up by the Chairman of the Committee of the Post Office, Senator James M. Mead (1885-1964), in 1937. The bill passed and a construction site was chosen in 1938. and construction itself began in 1940.

The original post office was housed in the Federal Building, located 44 East Central Boulevard in Downtown Orlando, Florida, from 1917 to 1941. In 1935, when James D. Beggs, Jr. became the postmaster, he began petitioning to move the post office from its Central Boulevard and Court Avenue location to a more spacious building. In 1939, St. James Catholic Church sold a plot of land of Jefferson Street for the new building. The building, located at 51 East Jefferson Street, was designed by Louis A. Simon in the Northern Italian Palazzo Revival-style, and was constructed by J. P. Cullen & Son. The new building opened in 1941 and housed the post office, the courthouse, and Internal Revenue Service (IRS) offices. The building was named an Orlando Historic Landmark in 1989. However, it was eventually sold back to the St. James Church. In 2003, the building was renovated and came under joint ownership by both the church and the federal government. Today, the building retains its post office services but also includes offices for the Catholic Diocese.

Originally created by the Greater Orlando Chamber of Commerce.

Copyright to this resource is held by the Greater Orlando Chamber of Commerce and is provided here by RICHES of Central Florida for educational purposes only. 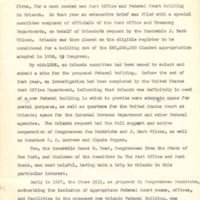