The Little Red School House, located at 519 South Palmetto Avenue, is Sanford's oldest standing building. Seminole County bought the land for the two-room school from the Florida Land and Colonization Company. Officially called East Side Primary, the building was constructed in 1883. Professor Coiner of Emory College in Oxford, Georgia, and Angie Tucker of Sanford, Florida, were the first two teachers at the Little Red School House. The building served as the first school house for Sanford's students, until the construction of Sanford Grammar School in 1902. Carrie Ensminger, daughter of Jefferson Clay Ensminger, and future educator, attended school here in 1893. She is pictured farthest to the right on the third row.

The building was remodeled numerous times until World War II, when it became a nursery school. Since the 1960sn, the building has been used as a center for Headstart, a soup kitchen, an arts center, and a treatment facility for women with drug addiction issues. In 1995, the City of Sanford acquired the building from the Seminole County School Board. Sanford donated it to the Tajiri School for Performing Arts and Academics, founded by Patricia Merritt-Whatley, in 1998. 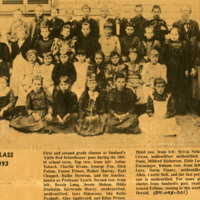