There's Something About Merry, The Plaza Theater

A program for the Orlando Gay Chorus' concert, "There's Something About Merry", on December 10 &
11, 2011, at the Plaza Theater in Orlando, Florida. The program includes short biographies on the Artistic Director Jim Brown, the Assistant Artistic Director Jedediah C. Daiger, the Choreographer Bob Smith-Trent, Principle Accompanist Sue Glerum, the ASL interpreter Debbie Drobney, program notes, an outline of the show's itinerary, a list of chorus members and contributors, and a history of GALA Choruses. It also features an obituary for Kenny King. 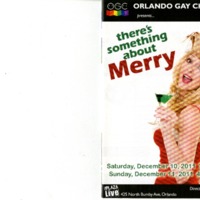