A program for the Orlando Gay Chorus' concert, "Changing Hearts", on May 19 &
20, 2012, at the Plaza Theater in Orlando, Florida. The program includes short biographies on the Artistic Director Jim Brown, the Assistant Artistic Director Jedediah C. Daiger, the Choreographer Bob Smith-Trent, Principle Accompanist Sue Glerum, the ASL interpreter Debbie Drobney, program notes, an outline of the show's itinerary, a list of chorus members and contributors, and a history of GALA Choruses. 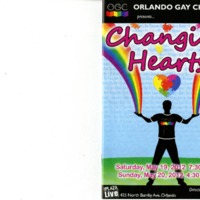 A Dream Is a Wish Your Heart Makes; Ain't No Turning Back On This Road; Angels; Bob Smith-Trent; Change the World; Changing Hearts; Children Will Listen; Come So Far (Got So Far to Go); Debbie Drobney; Everybody Rejoice; For Good; GALA Choruses; GLBT; Imagine; In My Life; Jedediah C. Daiger; Jim Brown; LGBT; LGBTQ+; Man in the Mirror; My Country; Nature Boy; OGC; Orlando Gay Chorus; Pride (In the Name of Love); Seize the Day; Sue Glerum; Sunrise, Sunset (with "Sabbath Prayer"); The Plaza Theater; Turn! Turn! Turn! (To Everything There is a Season); Yesterday; You Raise Me Up