We Are Family, The Plaza Theater

A program for the Orlando Gay Chorus' concert, "We Are Family", on May 14 &
15, 2016, at the Plaza Theater in Orlando, Florida. The program includes short biographies on the Artistic Director James A. Rode, the Associate Artistic Director Harold Wright, the Co-Head Choreographers Alecia Boon and Dwight Shropshire, Principle Accompanist Sue Glerum, the Principle ASL interpreter Debbie Drobney, program notes, an outline of the show's itinerary, a list of chorus members and contributors, and a history of GALA Choruses and the Orlando Gay Chorus.

The program has a date and location discrepancy. The correct dates of the concert were May 14 &
15, 2016. The location, although not mentioned on the program, is The Plaza Theater. 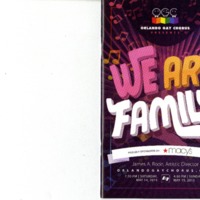