Naughty and Nice, The Plaza Theater

A program for the Orlando Gay Chorus' concert, "Naughty and Nice", on December 13 &
14, 2014, at the Plaza Theater in Orlando, Florida. The program includes short biographies on the Artistic Staff Harold Wright, Clay Price, Sue Glerum, Alecia Bloon, April Trimble and Dwight Shropshire, the Principle ASL interpreter Debbie Drobney, program notes, an outline of the show's itinerary, a list of chorus members and contributors, and a history of GALA Choruses and the Orlando Gay Chorus. 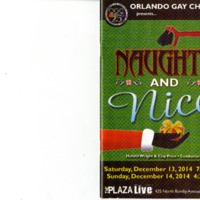