Tourism booklet from the mid-1920s. It contains 16 pages and shows many Orlando city sights including buildings in the Orlando commercial district.

The Orlando area was originally occupied by the Creek and Seminole tribes. In 1838, Fort Gatlin was erected on the shores of Lake Gatlin, just a few miles south of present-day downtown Orlando. Centered around Church Street in Orlando, Orlando became a city in 1884. Originally a cattle town, Orlando grew into a major citrus growing center by the 1920s. The city continued to grow during the Great Depression with aid from the Work Progress Administration (WPA). During World War II, Orlando became a major military center as well with the development of the McCoy and Pinecastle Air Force Bases, and with the addition of the Orlando Naval Training Center in 1968. Downtown Orlando declined in the 1960s and 1970s. Redevelopment began in the 1970s and continued into the 1980s, with projects such as Church Street Station. In 1998, a building boom began and continued through the 2000s.

Orlando is the seventh city of Florida, having a population of approximately 13,000. It is the largest inland city in the State.
From 1910 to 1920 Orlando increased 137.7 per cent in population and since 1920 its percentage of increase has passed those figures which. if maintained, will exceed 30,000 popula¬tion by the next census year.
The outstanding feature in the city's activities since 1909 have been its construction pro-gram, topping the others by an enormous gain. During 1921 the building permits issued totalled $1,596,019, while in 1922 Orlando went over the $3,000,000 mark.
The spirit of push and progress is scarcely equalled by any city twice its size. The business section is famed for its up-to-date appearance and its ever-growing skyline, which now em-braces on the newer structures five skyscrapers ranging from nine to eleven stories in height. Orlando also prides itself on having the largest and most beautiful High School building in the State.

The city's thirty-five miles of brick-paved streets, including the boulevard white way park system, are lined with nature's largest and stateliest pines and oaks. The boulevard encircling in a most strikingly and beautiful manner fifteen picturesque clear water lakes. The parks are unexcelled, each velveted with grass and dotted with a beautiful lake amply shaded by oaks and magnolias, and all within a few minutes walk of the center of the city.
Orlando's charms are so varied and its beauties so general that no matter what one's in-clinations, there are delights and amusements for every taste---golf, tennis, fishing, hunting, swimming, boating, horseshoe pitching, bowling on the green, croquet, shuffle boards, rogue, gun clubs, band concerts, grand opera season, vaudeville, handsome theatres and motion picture houses, and most of which are in the sunshine.
Orlando is the county seat of Orange County and is located in the very heart of Florida's brick highway system, the heart of the citrus belt, the heart of the lake region of Central Florida and from every angle most progressive and promising, giving every indication of being a city of 30,000 by the year 1930.

ORANGE AVENUE, AS SEEN FROM THE BALCONY OF ANGEBILT HOTEL.

A WATER HAZARD ON GOLF COURSE AT COUNTRY CLUB.

THE SKYLINE FROM LAKE EOLA. 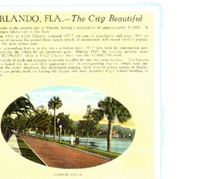