The Orange Blossom Special, the last train at the Church Street Station, located at 76-135 West Church Street in Downtown Orlando, Florida, in 2001. The original site was occupied by a railroad depot built around 1883 for the Atlantic Coast Line Railroad Company. The depot was designed by T. B. Cotter in the Queen Anne/Eclectic Victorian style and constructed by Henry Bradley Plant. The building was demolished around 1890.

The current Church Street Station was constructed by the South Florida Railroad on the same lot. The site also served the Tavares, Orlando and Atlantic Railroad, and the Orlando and Winter Park Railway. In 1926, the Orlando Health/Amtrak station took over passenger operations, but Church Street Station continued to serve as a ticket outlet and freight station until 1972.

In 1973, a Dixieland-theme entertainment complex was established between the railroad tracks and Garland Avenue in seven vacant buildings for $22 million. The depot itself houses retail shops. The depot was added to the U.S. National Register of Historic Places in 1976 and named an Orlando Historic Landmark in 1978. In 1988, the complex was expanded to include the Church Street Exchange and the Church Street Market. The development was led by Bob Snow and Steve Fuller and sold in 1989 for $61 million. The complex peaked in the 1980s, drawing approximately 1.7 million visitors a year. Due to failure to compete with major theme parks, visitor attendance dwindled and the complex was sold in 2001, only to close shortly after.

The Orange Blossom Special, remained at the station until January of 2012. The 100-year-old engine was transported to the Florida Railroad Museum in Parrish in order to make room for the new SunRail platform. Church Street Station is on the National Register of Historic Places. 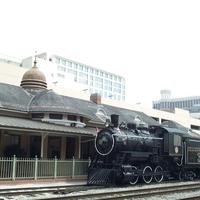