The Bust of Simón Bolívar at Lake Eola in Downtown Orlando, Florida, in 2013. This life-sized, 150-pound bronze bust is set on a polished stone plinth and was erected in March 1996. The monument was donated to the City of Orlando by Rafael Antonio Caldera Rodríguez, the president of the Bolivarian Republic of Venezuela from 1969 to 1974 and again from 1994 to 1999. The monument honors Simón José Antonio de la Santísima Trinidad Bolívar y Palacios Ponte y Blanco, the founder of Bolivia and the liberator of Venezuela, Colombia, Ecuador, Panama, and Peru. The Bust of Simón Bolívar was the first in a series of sculptures of international heroes that lines International Plaza and Bridge.

Bolívar, considered one of the most influential politicians in the history of the Americas, was a major player in Latin America's struggle for independence from the Spanish Empire during the early 19th century. Bolívar was also fundamental in the foundation of Gran Colombia, the first union of independent Hispanic nations, and led as its president from 1819 to 1830.

Copyright to this resource is held by Robin Dunn and is provided here by RICHES of Central Florida for educational purposes only.

"WITHOUT EQUALITY, ALL FREEDOMS AND ALL RIGHTS WILL PERISH."
SIMON BOLIVAR

DONATED BY DR. RAFAEL CALDERA,
PRESIDENT OF
THE REPUBLIC OF VENEZUELA
TO THE CITY OF ORLANDO.
MARCH 1996. 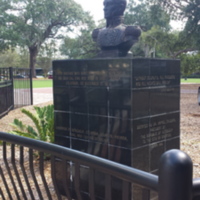